St. Paul’s has honored its former rectors in many ways. The building on South Pearl Street had a marble wall plaque for William Linn Keese on the nave wall. Portraits of William Ingraham Kip, Richard Bury and Thomas A. Starkey hung in heavy oak frames in the parish hall of the Lancaster Street church. And David C. Lithgow’s oil portrait of Roelif H. Brooks is still displayed in our parish library.

John Livingston Reese, our rector during the last third of the 19th century, was honored in several ways: with an oil portrait (now, sadly, much in need of restoration), a Tiffany window (The Good Shepherd, now in our vesting room), and a memorial book, published by the church’s vestry. It is this last, the only memorial volume for a rector published by the vestry, that I would like to tell you about today.

Reese was born in Philadelphia in 1838, and graduated from the Virginia Theological Seminary in 1861. He first served at St. Paul’s, Lockhaven, Pennsylvania. Even as a young man, he must have been an impressive figure. In a brief history of that church, he was described as “aristocratic” and “a veritable patrician, with a keen analytical mind, and eloquent, born to command.”[i] This aristocrat was in command here from 1864 until 1891, far longer than any other rector, and that quarter century surely left his imprint on the parish. 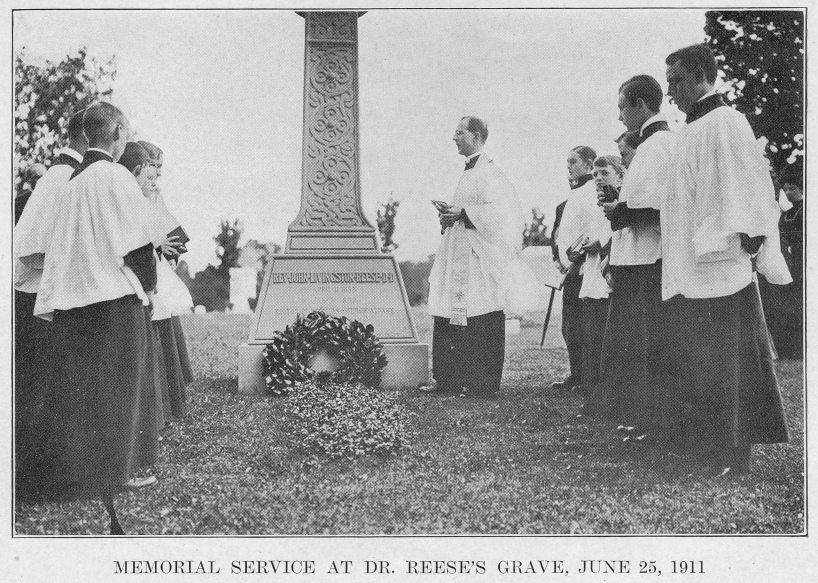 Photo of Memorial Service at the Grave of J. Livingston Reese in Albany Rural Cemetery, 25 Jun 1911

One of Reese’s legacies was financial: in his will, he left a portion of his large estate to St. Paul’s, with the stipulation that, beginning ten years after his death, the interest be used “for church purposes.” This bequest initially was $16,062.33. In 1909, when St. Paul’s was first able to draw interest from it, that sum had risen to $22,094.31.[ii] In a period when endowments were the main source of church income, the Rev. J. Livingston Reese Fund was an important source of income. As late as 1931, the principal had not decreased, this at a time when the St. Paul’s Endowment Fund was only $3,200.00![iii]

In Memoriam: Rev. John Livingston Reese, D.D.[iv], in addition to a brief biography, contains a description of his funeral, a tribute from the Bishop of Albany, William Croswell Doane, and the full text of two memorial sermons, preached on the Sundays following the funeral. The first of the memorial sermons was preached by Walton W. Battershall, rector of St. Peter’s Church, Albany. The second was by our then rector, Freeborn Garrettson Jewett, Jr., who had previously been Reese’s curate.

The funeral, held here in 1899, while not to be compared to that of Daniel Manning, was certainly impressive. Almost a thousand people visited as he lay in state. For the service, the church was full and forty clergymen attended. For the occasion, St. Paul’s choirmaster, George Edgar Oliver, composed a new hymn tune to the text “Now the Laborer’s Task is O’er.” 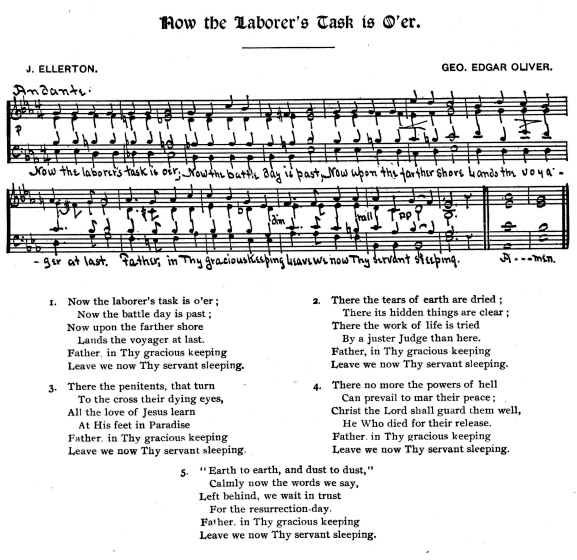 Our copy of the book was donated in 1937 by Lillian Bassett Wolverton. Mrs. Wolverton was the sister of James Frederick Bassett, who grew up at St. Paul’s, was ordained deacon with the support of our vestry, and served as J.L. Reese’s curate from 1881 until 1883.