Among the items in St. Paul’s archives are three identically-matted old photographs of a church building unlike any associated with our parish. The first, showing the nave and chancel of the church, is unlabeled. 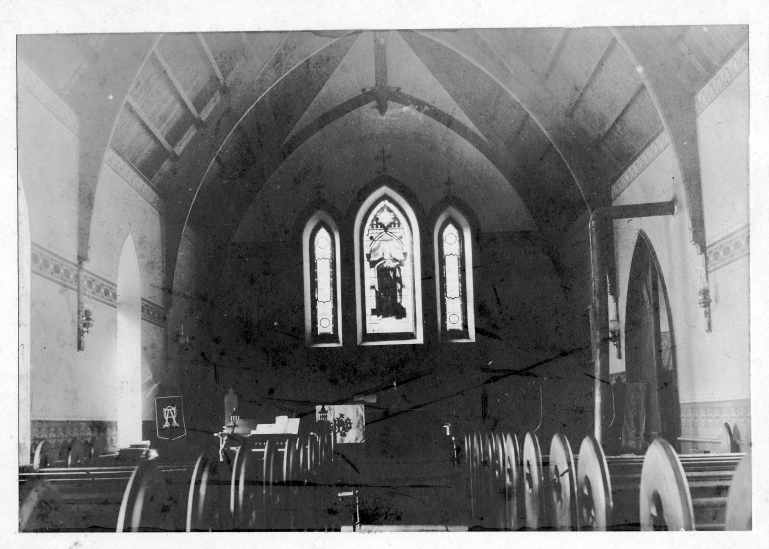 The second, showing the exterior of a church building, has a pencil notation on the back: “St. John the Evangelist, St. John’s, Rockland Co., N.Y.” 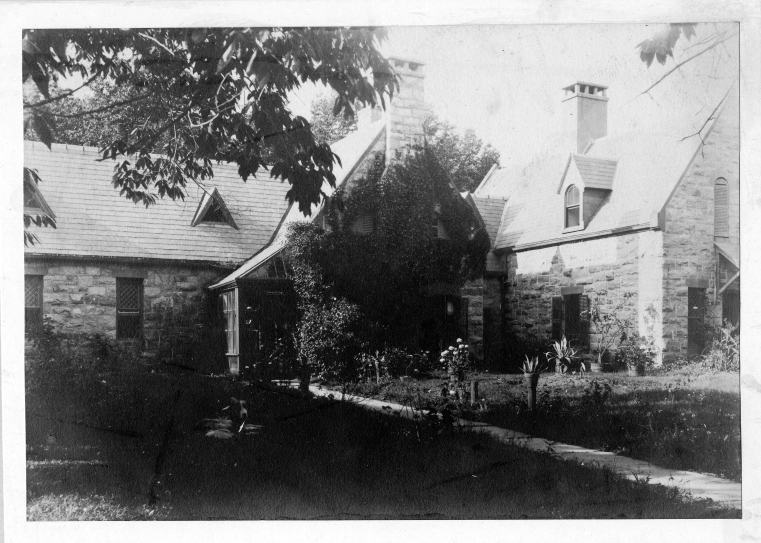 The third shows two people standing in front of the same building: a woman in a long dress, and a man in a clerical collar. The penciled notation reads: “Mrs. Ada B. Carey, Rev. Mr. Merrick, St. John’s, Rockland Co., N.Y.”

What is this church? There is now no Church of St. John the Evangelist in Rockland County. Nor is there a hamlet or village there named St. John’s. Mrs. Cary’s name provides the clue. She was an Episcopal missionary to the remote mountainous areas in Rockland County between about 1878 and 1915.

The Episcopal mission in Rockland County started in the mid-1860s, when the Rev. Ebenezer Gay, Jr. began caring for orphans in the Town of Haverstraw. By late in that decade, he had established an orphanage there named the House of Good Shepherd. In 1871, Mr. Gay purchased 64.5 acres in Tomkins Cove. The House of the Good Shepherd grew quickly, caring for local children and offering summer retreats for children from New York City.[1]

Ebenezer Gay’s ministry also expanded into the remote Ramapo Mountains west of Haverstraw. In 1878, he was joined by Ada B. Carey[2], who initially offered summer Sunday School classes. She quickly saw the need for additional social services. The area was very remote, with poor soil. The primary paying jobs available were making baskets and cutting wood for the brick industry in Haverstraw. Poverty and poor health were endemic, and there were limited educational opportunities.[3] Bishop Horatio Potter appointed her “visitor and reader to the people” and Mrs. Carey moved to the area, offering what services she could.

Mrs. Carey’s efforts came to the attention of Margaret Furniss Zimmerman, a wealthy widow in New York City. Mrs. Zimmerman provided financial support, and in 1880 offered to build a church and school building for the mission. The cornerstone of the Church of St. John the Evangelist, a memorial to Mrs. Zimmerman’s husband John E. Zimmerman, was laid on June 23, 1880, and the church and school were completed later that year.[4]

Under Mrs. Carey’s direction, and with Mrs. Zimmerman’s continuing financial support, the mission made significant changes in the remote area. Ada Carey traveled daily throughout the region, “walking and driving over the bleak mountains, visiting homes, winning people to the church, and relieving sickness, hunger, cold and suffering wherever found.” The residential school offered education to both local boys and youth from New York City. To improve connections with the larger world, she also petitioned for a post office, and served as postmaster from 1883 until 1905.[5]

Mrs. Carey seems to have operated independently from Mr. Gay after 1880. In 1891, a reporter for the New York Sun newspaper researched claims made in Mr. Gay’s fundraising, which described the “basket-makers” of Rockland County as “’semi-savage people,’ in danger of perishing of cold and hunger.”[6] The Sun reporter quotes Mrs. Carey’s vigorous response at length:

Well, I do hope that before you leave the mountains you will go to the homes of the people and see for yourself. Half savage, indeed! I assure you the basket makers and woodmen of our mountains are better educated than the inhabitants of most thinly populated localities. Within a radius of two miles of this mission there are two schools besides this one, and there are many other schools. Everybody can read and write, and cipher, at least, and many are pretty well educated. We get newspapers out here and people keep tolerably well informed about what is going on in the world and the country. I hope you’ll talk to everybody you meet and find out for yourself what a well-spoken, intelligent people we are here. Things are very different now from ten years ago, you know. Mr. Gay describes the basket makers of twenty years ago as those of to-day…

Of course, there are shiftless and lazy people here, as everywhere, and they, with the sick and unfortunate, are pitiably poor. But Mrs. Zimmerman don’t let anybody suffer for lack of food or clothing. We attend to that, and there is no need of Mr. Gay troubling himself…

There is another statement that has been made in these articles that I do not think Mr. Gay should permit. He was not the first to bring the Gospel to the mountain people. He did lots of good, no doubt, in those days of many years ago when the people really were ignorant and poverty stricken, but it’s wrong to say he first brought them the Gospel. They had their own Methodist churches through this country many years before Mr. Gay’s time.[7]

As to the other person in our photographs, Augustus Warren Merrick had a much shorter connection with the mission. He was rector of St. John’s from about 1895 until 1899.[8]

After Mrs. Zimmerman’s death, the church and school continued to be supported by a fund she established. At some point before 1935, the endowment was only able to support the rector’s salary, and the school closed.[9] The church, now known as St. John’s Church in the Wilderness, still stands in the Ramapo Mountains and services are held there every Sunday. The church and its grounds are now the only private property within Harriman State Park.

So now we know what this little church was and who the people in the photograph are. But one mystery remains. How did these photographs come to be in St. Paul’s records? The little church in Rockland County and St. Paul’s were then and are still today in different dioceses. And I’ve been unable to find any connection between the parishes. One possibility is that St. Paul’s was involved in fundraising for St. John’s. Albany newspapers in the 1880s and 1890s carried articles about the sad plight of Rockland County basket-weavers and about efforts to raise money for Mr. Gay’s programs.[10] St. Paul’s was active in supporting missions (both foreign and domestic) in this period, and it possible that the Rockland County mission was one of the causes supported.

[2] According to the 1900 census, Ada Bessie Carey was born in July 1847 on the Isle of Guernsey, Channel Islands. She emigrated to the United States in the same year that she began working in Rockland County. Mrs. Carey returned to the United Kingdom in 1914. A window in her memory was installed in the church in 1935.

[6] “Among the Basket Makers: A Primitive Community Only Fifty Miles from the Metropolis,” The Sun 18 Jan 1891, page 26. See also the descriptions of the residents in Albany newspapers, cited in endnote 10.

[8] A. Warren Merrick was born in Ireland in 1859 and ordained in the Church of Ireland. He came to the United States in 1894, licensed by the Bishop of New York, but still under the authority of the Bishop of Dublin. After leaving St. John the Evangelist, he served a parish in Ellenville, Ulster County, and then churches in the Diocese of Long Island. He moved to England in 1912 and died in London in 1933.

[9] “Dedicate Memorial at Chapel in Wilderness”

[10] See, for example, “Where Gaunt Poverty Lingers: Terrible Destitution of the Basket Makers of Rockland County:  An Albany Lady’s Appeal for Help for the Naked and Starving,” Albany Evening Journal 29 Dec 1885; “The Basket-Makers: A Singular Community in Need of Aid,” Albany Evening Times 26 Feb 1886; “Miss Murray’s Mission: Among the Basket Makers of Rockland County,” Albany Evening Times, 7 Dec 1886; “A Chance for the Charitable,” Argus 30 Apr 1893. Melvina F. Murray seems to have been the driving force behind these efforts. She traveled to Rockland County to investigate conditions and organized several fund-raising events.

1 thought on “The Church of St. John the Evangelist, Rockland County”