Today, December 28, is Holy Innocents’ Day, and we are sharing a manuscript poem, found in St. Paul’s archives, that was written for this day by William Prall, our rector from 1902 until 1905.

Jesu, pure and undefiled,
Make me as a little child
Wash my soul from grief and sin
Keep me good and true within.

Only as a child may I
Hope to see Thee when I die.
As a child I long to be
Now and for eternity.

In the fullness of Thy grace
Turn upon me Thy dear face
Assuage the tears that I have shed;
Lay Thy hands upon my head.

Bless me as Thou once didst bless
The children that around Thee press’d;
In thy blessing I shall be
A child for all eternity.

William Prall was born 6 April 1853 in Paterson, New Jersey[1], a son of Edwin T. Prall and Rachel More Thomson.[2] He earned the A.M. and Ph.D. degrees at Heidelberg University in 1873 and the LL.B. at Columbia University in 1875 and then took up the practice of law in Paterson.[3] He served a term in the New Jersey State Assembly (1883-1884), during which he wrote and sponsored the state’s free public library statute.[4]

William Prall married Lilian Porter Clapp in 1881[5] and the couple had a daughter, also named Lilian. Mother and daughter died within a year of each other[6], in 1884 and 1885 respectively. Weeks after his daughter’s death, Prall was accepted as a candidate for the priesthood by Thomas A. Starkey, St. Paul’s former rector, and by then bishop of Northern New Jersey.[7] 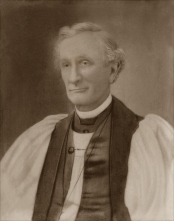 Prall began study at the De Lancey Divinity School (associated with Hobart College, Geneva, New York) in the spring of 1886.[8] He was ordained a deacon in 1886 and priest in 1887, both ordinations by Bishop Starkey.[9]

Prall’s first assignment was as assistant to J. Livingston Reese at St. Paul’s, Albany, where he served from 1887 to 1889. He next served as rector of the Church of the Holy Comforter in South Orange, New Jersey (1889-1891) and St. John’s Church, Detroit Michigan (1891-1900).[10] In 1900 he chose to return to St. Paul’s Albany as rector, to the “intense surprise” of an anonymous New York Times columnist, who described St. Paul’s as “the very reverse of rich and marked by the signs of decrepitude sometimes incidental to advanced age”.[11] Prall was to stay at St. Paul’s from 1900 until his retirement in 1905.[12] In 1903, he briefly accepted the wardenship of St. Stephen’s College (now Bard College) in Annandale, New York, but changed his mind and returned to Albany after he and his wife “expressed dissatisfaction with the accommodations afforded”.[13]

William Prall was awarded an honorary Doctor of Sacred Theology degree by the De Lancey Divinity School in 1893.[14]

In 1897, during his stay in Detroit, Prall married Helen Ames Lothrop.[15] There is no evidence of children from that marriage.

Among William Prall’s publications are:

Book Chapters:
“The Priest in the Organized Parish” Chapter VII (pages 92-110) of Edward Macomb Duff (ed.), The American Priest at Work: A Symposium of Papers (Milwaukee: The Young Churchman Co., 1900)

Published sermons and lectures
“Past, present and future; a sermon preached January 26th, 1902, in commemoration of the seventy-fifth anniversary of the founding of the parish of St. Paul’s, Albany, N.Y.”

“The Reformation and the Origin of the Church of the Huguenots: A Study” (New York: The Huguenot Society, 1924)

[14] Journal of the Fifty-sixth Annual Council of the Protestant Episcopal Church in the Diocese of Western New York 1893 (Buffalo: printed for the Council, 1893), page 54

On this Christmas morning, a greeting from the only carol written for St. Paul’s Church, Albany. “A Christmas Carol”  was “written for the children of St. Paul’s Church” in 1856 by George William Warren, our organist and choirmaster from 1848 until 1860 and sets verse by our rector, Thomas A. Starkey.

Thirty years later, the song was still sung in Albany. Huybertie Pruyn Hamlin, in her memoir An Albany Girlhood, refers to it as “our favorite carol” in the 1880’s. Writing fifty years later, she still recalled the frosted bells on the cover and the last line of the first verse: “to young and old, to sad and gay, a merry greeting on Christmas Day!”

Today, we see another Christmas event conducted by the women of St. Paul’s Church, a Christmas Holiday Festival and Bazaar in December 1981. The photograph appeared in the Albany Times-Union for November 30, 1981. The festival was to open the next morning, December 1, in the the church parish house, with a luncheon at noon and a roast beef dinner that evening.

In the photograph, the women are working on items for the sale. 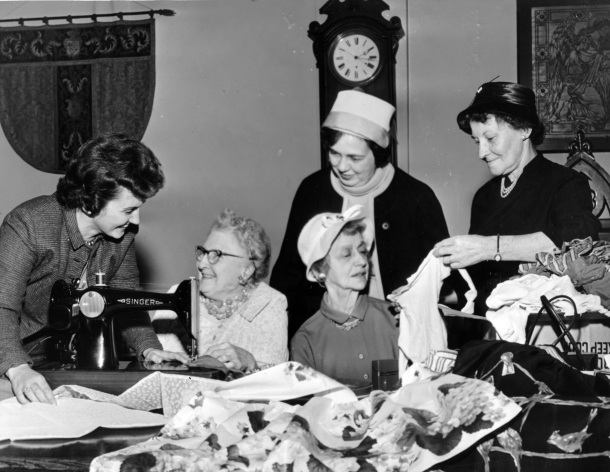 The women of St. Paul’s have conducted fairs, sales and festivals since the church’s earliest years, and these benefits have played an important part in the financial support of the church. The first recorded fair was in December 1836: a “Ladies Fair at Stanwix Hall for the benefit of St. Paul’s Church,” at a time when the struggling young parish desperately needed that support. Today, we see photographs of a St. Paul’s Christmas Bazaar published in the Society page of the Albany Times-Union for December 4, 1961.

The first photograph shows three women of the parish “as they prepared luncheon for guests at the church.” As was then the custom, the newspaper gives only their husbands’ names; their first names (in brackets) were obtain from other sources. 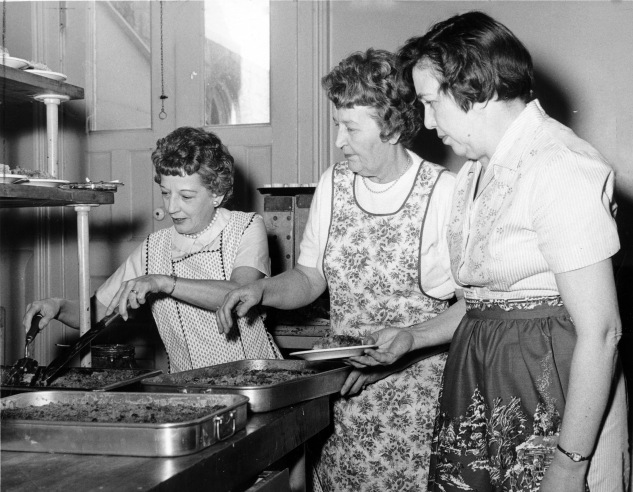 Christmas Bazaar, December 1961: in the kitchen

In the next photo, two women arrange the gifts in Santa’s pack.