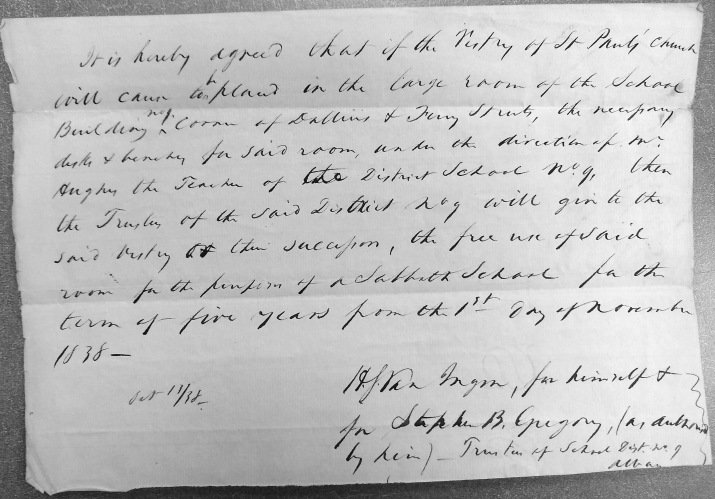 Among the miscellaneous papers in St. Paul’s old records (now safely housed at the New York State Library) is an inconspicuous half-sheet that gives us an interesting window onto public education in Albany 180 years ago.

It is hereby agreed that if the Vestry of St. Paul’s Church will cause to be placed in the large room of the School Building No. 9 corner of Dallius & Ferry Streets the necessary desks & benches for said room, under the direction of Mr. Hughes[1] the Teacher of the District School No. 9, then the Trustees of the said District No. 9 will give to the said Vestry or their successors, the free use of said room for the purpose of a Sabbath School for the term of five years from the 1st day November 1838.

In 1838, the city of Albany had provided public education for less than a decade. As described in an excellent blog post by Fr. Kevin McGrath, O.P., it was only in 1830 that Albany organized public school districts. The effort was expanded in 1838 (the year this offer was made) with the construction of eight new schools, among them School #9, on the northeast corner of South Ferry and Dallius Street (now known as Dongan Street).

School #9, a three-story brick building with room for 210 students[4], was directly across Dallius Street from St. Paul’s church on South Ferry Street. While the city had been able to erect the new schools, it appears that it was not able to furnish them all. So the school trustees then turned to St. Paul’s, hoping to be able to obtain the necessary furniture at minimal cost.

Such an offer could certainly not be made today, when public institutions steer well clear of any financial arrangements with places of worship. But in a different time, with a looser interpretation of the Establishment Clause, the offer made sense for a fledgling school system that was short on funds.

When they made this offer, were Mr. Van Ingen and Mr. Gregory aware that St. Paul’s was overwhelmed with debt, and was being pressured by its creditors to sell the Ferry Street building? They may well have been, because there had been rumors about the sale of the building as early as 1836[5]. In fact, St. Paul’s vestry decided to sell the building at a meeting on January 14, 1839, three months after the trustees’ offer. By July 1839, St. Paul’s had left the South Ferry Street building, and was worshipping with St. Peter’s Church on State Street.

Although the offer was never acted upon, we have a hint that St. Paul’s intended to accept it. A cryptic penciled note[6] also in our archive reports a meeting immediately after the January 14, 1839 vestry decision that mentions “contributors for fitting up the Sunday School Room.”

[1] William H. Hughes was a teacher in School #9 for thirty-seven years, starting in 1834. No wonder that, a few years before his retirement in 1871, The Albany Evening Journal reported that neighborhood children knew the South Ferry Street school as “Hughes’ school.”

[2] Harmanus S. van Ingen was one of Albany’s earliest fire chiefs, the Chief Engineer of the Tivoli Hose Company, Albany’s only hose company as late as the Great Fire of 1848. On his retirement, the company was renamed the Van Ingen Company.

[3] Stephen B. Gregory was a businessman, a partner in the firm of Gregory, Bain & Co., merchants in china, glass and earthenware.

[6] The full text, also on a half sheet of paper reads: “Minutes read. An amendment to the resolution of the vestry that it was expedient to sell St. Paul’s Church was moved, viz,. after the words to sell St. Paul’s church provided $4000 was not raised by a com. appointed by the members of the congregation at a meeting held in the church Monday 14 Jany. On motion of S. DeWitt Bloodgood the following resolutions were passed. Resolved that the names of the contributors for fitting up the Sunday School Room be entered on the minutes together with the expense of the same.” 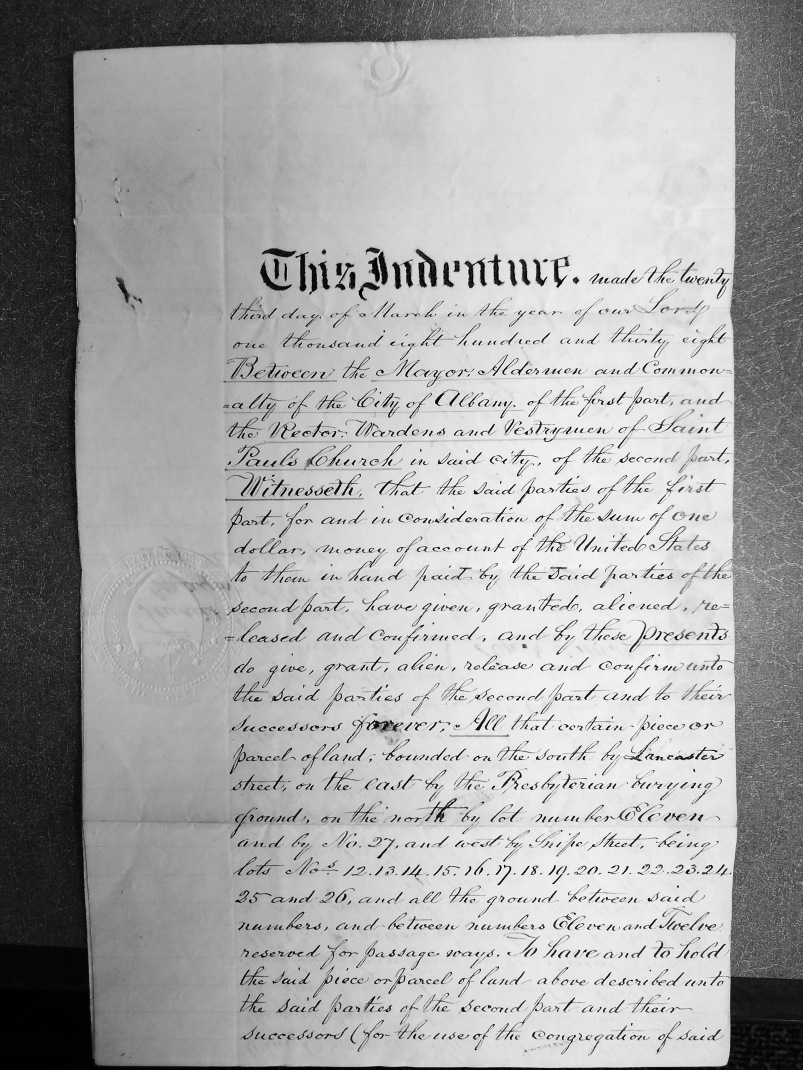 In a previous post, I described St. Paul’s cemetery plot, given to the congregation in 1878 and still in use today. But that section of the Albany Rural Cemetery was not our first cemetery plot. Forty years earlier, in March 1838, the City of Albany granted St. Paul’s “[a]ll that certain piece or parcel of land, bounded on the south by Lancaster street, on the east by the Presbyterian burying ground, on the north by lot number Eleven and by No. 27, and west by Snipe Street” for use as a cemetery. 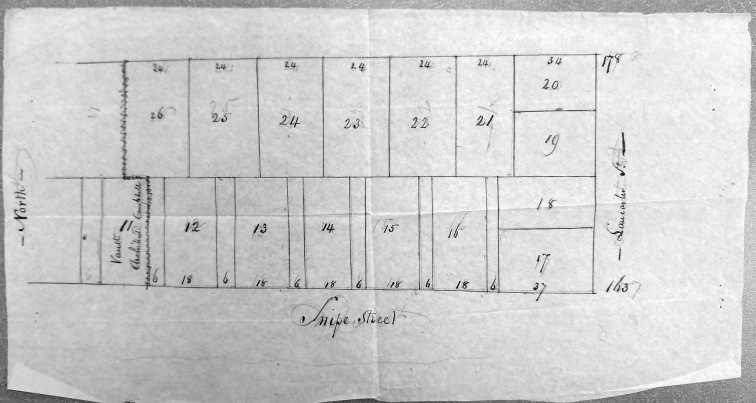 Can’t quite picture where that would have been? For the past 150 years, Snipe Street has been known as Lexington Avenue. If you extend the line of Lexington and Lancaster Streets (both now much shorter than they were then), you will find that the plot’s southwest corner would have been at a point on the north side of what is now Washington Park.

This was in the State Street Burying Grounds, Albany’s public cemetery from 1800 until 1866. Each Christian denomination had a section, and there were also a Potter’s Field, a section for African-Americans and a small number of graves of persons not associated with a church. 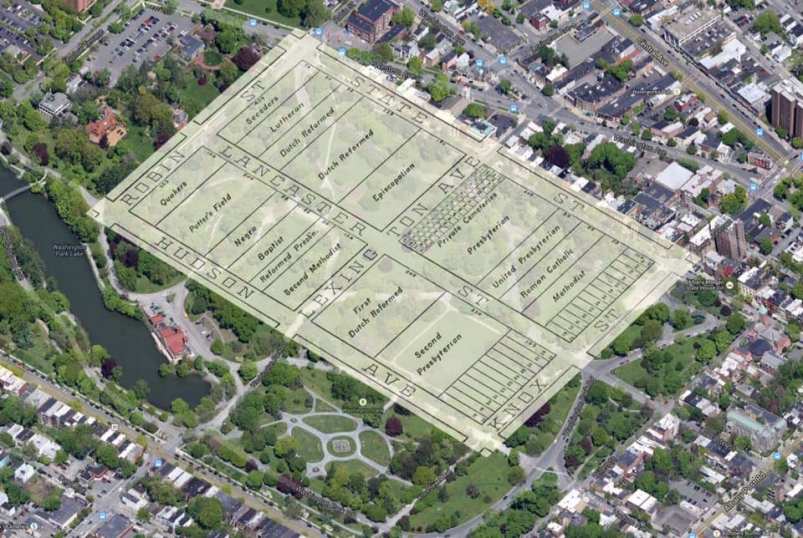 This image overlays a current photograph of the Washington Park area with a map of the State Street Burying Grounds. In 1838, there were only two Episcopal churches in Albany, and you might expect that St. Paul’s shared the Episcopal lot with St. Peter’s. But it appears that St. Peter’s had sole use of the Episcopal section because the legal description makes it certain that St. Paul’s plot was at the south end of the section marked “Private Cemeteries” on this map. To confirm the location, notice that in the diagram of St. Paul’s section, the north end is marked as the vault of Archibald Campbell. His vault would have been the first of these Private Cemeteries to the north of our plot.

When the State Street Burying Grounds was closed and the land taken to build Washington Park, the burials were moved to the then-new Albany Rural Cemetery, in a section known as the Church Grounds. Our next research effort will be to try to determine who from St. Paul’s was buried in this plot, and where in the Albany Rural Cemetery they now rest.