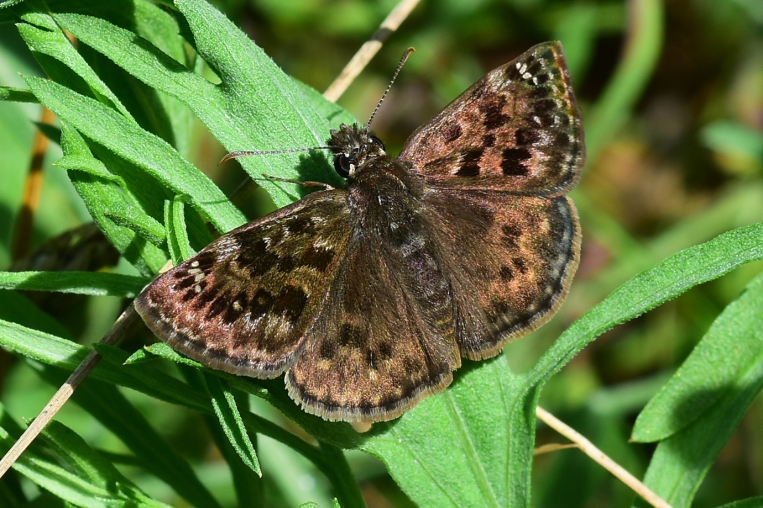 Not Erynnis brizo, but a related species, E. martialis, the Mottled Duskywing, photographed in the Albany Pine Bush, August 2021

The vestry portraits in St. Paul’s archives make dull browsing.  Vestrymen in the 19th century tend to look alike: serious middle-aged businessmen who we imagine had few interests in life other than their businesses and their families. But among those formal portraits there is one who stands out in three dimensions, with a passion for nature that suggests a person we would really like to know more about. That man is William Washington Hill, St. Paul’s vestryman and a noted collector of butterflies and moths. A few years ago, I wrote about Hill and his business partner (and fellow St. Paul’s vestryman) John Woodward, promising to say more about Hill’s passion for lepidoptery. With the publication of an article in spring 2020 about Hill’s collecting in the Adirondacks,[1] it is time to fulfill that promise, with particular focus on his work in the Albany Pine Bush. 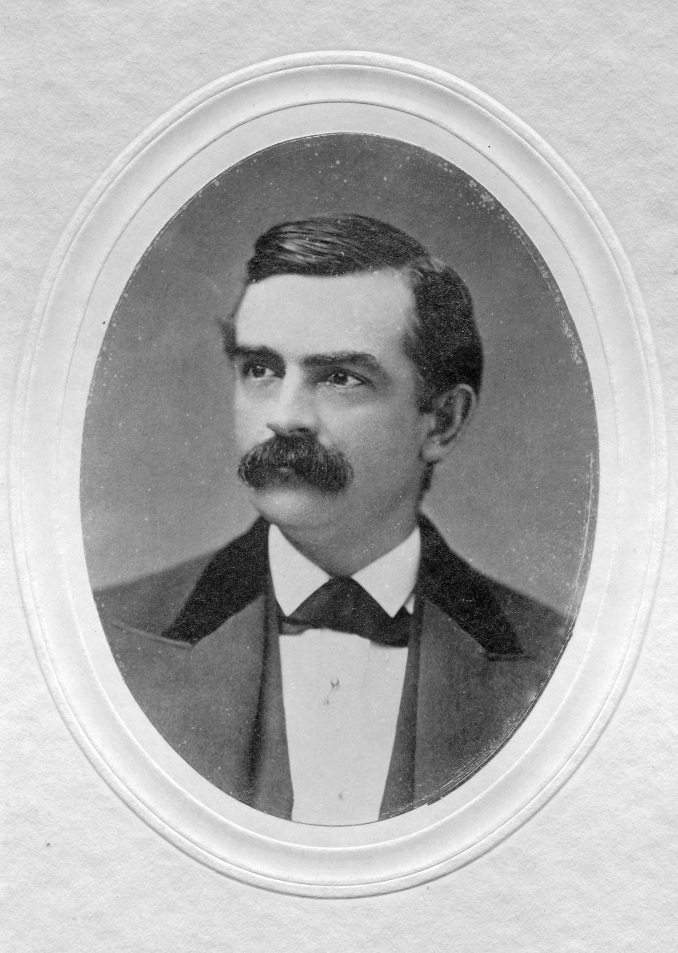 William Washington Hill’s natural history pursuits began with fishing, a life-long avocation. This developed into a hobby of collecting plant specimens, and later into an enthusiasm for insect collecting. Hill’s interest specifically in moths and butterflies may have been spurred by a display at the Albany Institute in October 1874. For several years, local businessman Otto Meske had been collecting lepidoptera in the Albany Pine Bush, and on this occasion he displayed over 3,000 specimens, many of them collected in the city of Albany or in the nearby Pine Bush. At the opening of the exhibit, State Entomologist Joseph A. Lintner delivered a lecture, describing Meske’s efforts and praising the care with which the specimens were prepared, identified and labeled.

Lintner had accompanied Meske on many of these collecting trips, and described a particularly telling incident.

I cannot forbear from earnestly commending the zeal displayed by Mr. Meske in the prosecution of his favorite pursuit. It bears with it its own reward, in the keen enjoyment which it affords him. On one occasion, when we were passing a day together in that almost unequalled entomological collecting ground, Center Station, midway between Albany and Schenectady, on the pine barrens, where an abundant insect fauna would not be looked for, and had met with eminent success in the capture of an unusual number of rare, beautiful and new forms, culminating in my friend’s netting a perfect specimen of Sesia gracilis[2], he turned to me, trembling with emotion and his face glowing with enthusiasm, exclaiming : “What is making money compared with this !”[3]

Meske’s enthusiasm and Lintner’s praise must have captivated Hill. Here was another Albany businessman who had found a challenging and exciting avocation. Hill soon joined Meske and Lintner in their collecting expeditions, both in the city and the Pine Bush. And this trio became a quartet when they were joined by Albany physician James Spencer Bailey[4].

Hill continued to fish every summer in the Adirondacks, that passion now supplemented by collecting moths and butterflies.[5] During the rest of the year, Hill was busy here in the Albany area, initially in and around the city, but then in the Pine Bush with Bailey, Lintner and Meske. The quartet “made excursions in the vicinity of Albany and finally Centre was hit upon, as an extraordinarily productive locality and here collecting was carried on with such vim and persistency that the place became known as ‘Butterfly station.’ Enormous quantities of ‘sugar’ were prepared and used, and thousands of moths paid the penalty.”[6]

Our best information about these jaunts comes from Dr. Bailey, who wrote:

Center is situated on the line of the New York Central Railroad, mid-way between Albany and Schenectady. The road in reaching this point traverses a distance of eight miles from Albany, and attains an elevation of 315 feet above tide-water.

During the warm months there are two daily trains stopping at this station, going east and west, and are so arranged as to give the scientist the advantage of the first half of the day on the ground. The place itself is not in the least attractive, consisting of but a few dwellings erected for the accommodation of the Railroad employes [sic].

It is among the pine barrens and seemingly unfertile and inhospitable soil where is found so much to interest and instruct the student, for here he can commune undisturbed with nature, and at each step find his pathway strewn with objects of interest. Center has a world-wide reputation botanically and entomologically. The collecting ground is embraced in a tract of one thousand acres, which civilization has never disturbed, but has allowed to remain in its primitive condition. It is now owned by a community of Shakers, living in close proximity.

The entomological tract is situated on the south side of the Railroad, and lies on both sides of the road leading to Sloans, any great divergence from which will not prove successful to the collector. It is unnecessary to traverse this road more than one mile, which brings you near to Mount Brizo, which is a bold projecting sand mound rising abruptly nearly to the height of 100 feet above the surrounding country on the east and gradually sloping to the west.[7]

These place name require some clarification, even for those who know the area well. The whistle-stop at “Butterfly Station” is now known as  Karner[8], and the road of which Bailey speaks would have taken the collectors a mile or so to the west-southwest. [9] 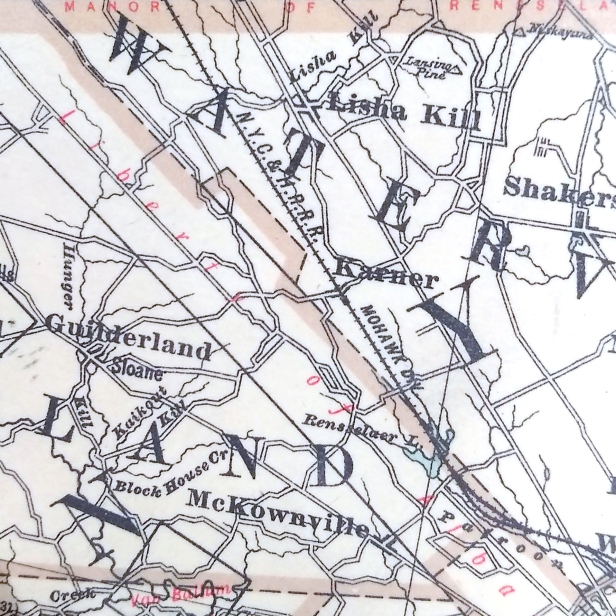 Detail of a 1895 atlas, showing roads between Centre Station at Karner and Sloan’s (the hamlet of Guilderland)

The identity of the dune near which they collected is a bit more difficult to determine.  It has been suggested that that it is the one on the northwest corner of Old State Road and New Karner Road[10], now much reduced in size by sand mining. “Mount Brizo” is a name that I’ve never found outside this account, and I think it is likely that it was invented by Bailey and the others in reference to a species they collected there, Erynnis brizo.[11] 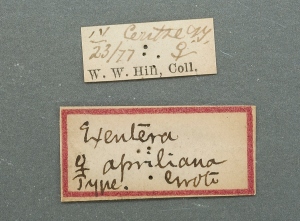 While he was not formally trained, Hill was quite disciplined, labeling each specimen with the date and location in which he had found it. Following his death in 1888, Hill’s children donated his carefully preserved collection of 10,000 specimens representing more than 3,000 species to the New York State Museum. A catalog of the collection published in the Museum’s Bulletin lauded his significant contributions to the field of entomology.[12]

Hill’s collection is still intact, forming a part of the New York State Museum’s holdings. Between 1917 and 1921, his collection (along with those of Bailey, Lintner, Meske and Erastus Corning) was on display at the Museum and the Albany Institute during “Butterfly Week.” A 1921 article promised “Butterflies In All Colors of Rainbow,” and described in detail the “annual event eagerly anticipated in Albany.”[13]

[8] The station was located on what is now the grounds of Green Trucking Supply, on Railroad Avenue Extension, in Colonie, New York.

[9] “Sloan’s” is now known as Guilderland, near the corner of Western Avenue and Foundry Road. Originally named Hamilton or Hamiltonville, in the 19th century this was the site of a glass works, and briefly, an iron foundry. By the 1870s, it was informally known as Sloan’s, for the hotel kept there by Henry Sloan.

[11] The Sleepy Duskywing. In 1877, Bailey reported collecting the species at Centre, referring to it as both Nisoniades brizo and Thanaos brizo. Those names have since been subsumed under Erynnis brizo. “Brizo” is Greek for to nod or slumber.