St. Mark’s Chapel was the third and last of St. Paul’s missions, but there was one additional mission that was carefully planned, a building designed, a cornerstone laid, yet never served that purpose. You know it as the Church of the Holy Innocents on the corner of North Pearl and Colonie Street, but it began its life as the Chapel of the Holy Innocents, a chapel of St. Paul’s Church.

When William Ingraham Kip returned from his medical leave in August 1845, he resumed the busy life he had left a year earlier, and the church continued to flourish. 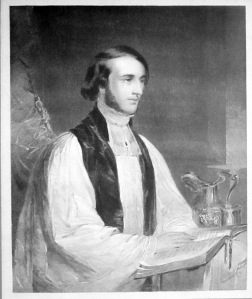 Two years later, in 1847, the increased size of the congregation was straining the available seating in the North Pearl Street church building. Consulting with his long-time senior warden, William H. DeWitt, Kip proposed to build a chapel in Albany’s rapidly growing North End, intending “to sustain it as a free church and mission.” When he referred to a free chapel, Kip meant a building which was conveniently located for St. Paul’s parishioners who lived far from the main church, and one which was financially supported without resort to pew rents. The clear intention, then, was to create what is known as a “chapel of ease” for St. Paul’s parish, not a church for a new, separate parish.

St. Paul’s vestry approved these preliminary plans “to build a free chapel in connection with this Parish” in July 1848, and a building committee was formed. The vestry specified that the finances of the chapel be kept distinct from St. Paul’s, with “no liability on any account to be incurred or created against St. Paul’s Church.”

These plans were derailed a month later by the massive fire of August 1848, which destroyed 439 buildings in close to 200 acres in the heart of the city. The subscription for a building fund failed. It was at this time that DeWitt volunteered to support the entire cost of the new chapel.

William and Anna DeWitt had four children, all baptized at St. Paul’s Church. All died as babies or young children between 1830 and 1844. A heart-breaking note in our parish records, after the record of the death of the two boys within two days of each other in December 1844, reads: “the parents of these children are now childless.” The DeWitts proposed to fund the chapel as a memorial to their children.

The couple could well afford this donation. William Henry DeWitt was a lumber dealer, and while we don’t know his wealth at this time, fifteen years later he paid taxes on income of about $36,500, the equivalent of almost a million dollars in today’s currency.

Construction of the Chapel of the Holy Innocents began on May 13, 1849. Kip wrote that day to William Rollinson Whittingham, Bishop of Maryland, asking that he lay the building’s cornerstone on June 7, 1849, when Whittingham was already scheduled to be here to consecrate Trinity Church and to perform confirmations at St. Paul’s. Kip wrote: “Cannot you on that afternoon lay the corner stone of our Chapel of Ease? It was begun today & will be about ready for the corner stone at that time. It is to be attached to St. Paul’s Parish (seats free) & to be principally under the charge of an assistant minister. It is to be of stone & far finer than the Holy Cross at Troy.” 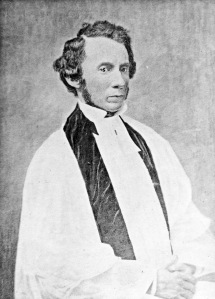 The assistant minister whom Kip had chosen was a recently-ordained deacon, Sylvanus Reed, who had grown up at St. Paul’s and had been supported for ordination by the vestry. Whittingham must have accepted Kip’s invitation, because the chapel cornerstone was indeed laid on June 7, 1849, with Kip preaching in place of the Bishop, who was indisposed.

You might ask why the Bishop of Maryland was presiding. Didn’t the Diocese of New York (in which St. Paul’s then resided) have a bishop? Yes, Benjamin Tredwell Onderdonk was bishop, but in 1845 he had been found guilty of “immorality and impurity” by the House of Bishops and suspended “from the office of a Bishop … and from all the functions of the sacred ministry.” New York had a bishop, but a bishop who could not officiate. Between 1845 and 1852 (when the first provisional bishop was elected), all episcopal services had to be conducted by bishops from other dioceses.

In his report to the Standing Committee of the Diocese of New York, Bishop Whittingham wrote: “On Thursday, June the 7th, I laid, with appropriate solemnities, the corner-stone of the Chapel of the Holy Innocents, designed for a free chapel of ease of St. Paul’s Church, Albany.” And through most of 1849, Holy Innocents is consistently referred to as a chapel. That changed abruptly in late 1849 or early 1850. The DeWitts had been members of St. Paul’s since 1831; William H. DeWitt had been a warden of St. Paul’s Church since 1837. But on February 16, 1850, the chapel was organized as the Church of the Holy Innocents, a separate parish in the city of Albany, with William H. DeWitt its senior warden.

Interior of the Church of the Holy Innocents

We will never know what prompted this change. Could DeWitt have felt that, having paid the entire cost of the property and the church building, he should have control of the enterprise? Did William H. DeWitt want Holy Innocents to be his own church?

DeWitt’s interest in control is shown clearly in an unusual condition in the church’s incorporation “[a] reservation of a right of nomination to the rectorship, to the donors and their heirs (said heirs to be of the age of twenty-one years, and communicants in the P[rotestant] E[piscopal] church).” DeWitt wanted to be able to name the rector, and wanted to grant the same right to his heirs forever.

We have better evidence for William Ingraham Kip’s view of this condition. Before the church was consecrated in September 1850, three Albany clergymen filed a formal objection to the consecration, specifically objecting to DeWitt’s control over the naming of a rector. Kip was not present at the consecration, which suggests that he was one of the three. But we also have a cryptic letter from the vestry to Kip, praising “your proceedings in the matter of the consecration of the ‘Church of the Holy Innocents’”. What those proceedings were is not specifically stated, but the vestry does praise Kip for guarding against “innovations” and “dangerous precedents,” which probably refer to the right of nomination.

Bishop Whittingham discussed the objection with DeWitt, who agreed to modify the right, restricting it to the DeWitts’ issue (as opposed to heirs), limiting the number of nominations to three and requiring that the nominations “be exercised within a year from the occurrence of a vacancy.” Whittingham then consecrated the church, with no clergy from St. Paul’s present.

As with the break with Trinity Church nineteen years earlier, the creation of this new congregation came at significant cost: the loss of William and Ann DeWitt. But the establishment of Holy Innocents did, indeed “promote the interests of religion in this City” as St. Paul’s vestry had predicted.

In its first home for almost one hundred years, and on Clinton Avenue for another seventy years after its merger with Grace Church, the congregation has been an important presence of the Episcopal Church in north Albany.

The DeWitts’ gift still stands in its original location. Although the Russian Orthodox congregation that worshiped there for forty years replaced the traditional bell-cot with an onion dome, the authentic Gothic complex still creates the feeling of an English country churchyard on a gritty street corner. 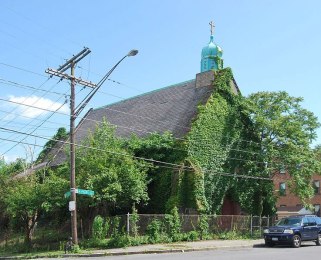 The building has been empty since 1983, and, to our city’s shame, has been allowed to deteriorate. While the collapse of a section of wall in May 2015 is particularly worrisome, we may hope that the city and the building’s current owner, Hope House, will be able to stabilize the structure, not only as a precious example of early Gothic revival architecture, but also as a reminder of its important role in Albany history.

If the building cannot be saved, my hope would be that some of the stained glass could be rescued. According to the building’s National Register application: “the Bolton windows in the west facade and the chancel, and the two grisaille windows near the west end of the nave” were still “extant, but in need of repair” in 1978. They are the work of John Bolton (1818–1898), who collaborated with his brother William Jay Bolton. They represent some of the earliest stained glass made in this country using authentic medieval techniques.

8 thoughts on “Holy Innocents: The Chapel of Ease That Never Was”