Last year, we shared a snapshot of the groundbreaking for St. Paul’s new Hackett Boulevard building on July 26, 1964. 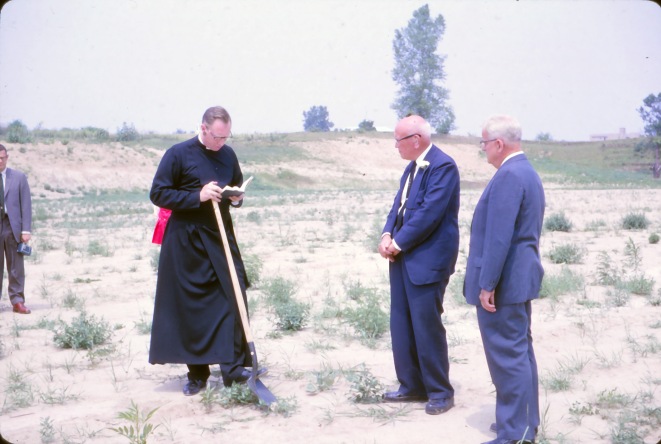 Thanks to the late Mildred Lentz (and to Pam Love, who has preserved her files) we now have another photograph taken that day.

The photographer was facing west, and in the background we can see the tower of the Albany Academy, and the Child’s Hospital and St. Margaret’s Home buildings. Fr. J. Raymond McWilliam and wardens Frederick Eckel and Raymond E. Foskett are in the foreground, with the congregation forming an arc around them. Thanks to Dave Van Hattum, Betty Peters Bertrand and Gertrude (Trudy) Van Hattum, we can identify a few faces in the congregation. To the right of the rector and wardens, the woman in the striped dress is Gertrude Van Hattum, with her sons Dave and Steve to her right and left respectively. To the left of the rector and wardens, the woman in the flowered dress is Erma Peters; to her right, in a white dress, is her daughter Betty Peters. The man second from right holding flowers is Dave Powers. On the left side, the man standing next to man with suspenders is William S. McEwan.

From a Knickerbocker News article printed on the previous day, we know that the congregation held its last service in the Lancaster Street building at 11:00 AM on Sunday, July 26, 1964, and then proceeded directly to the Hackett Boulevard site.

The Knickerbocker News article said that the new building was to be completed by September 1, 1965.  Because of a strike by masons, the building was not ready until spring 1966, and the first service was held April 7 of that year. For that period, more than twenty months, the congregation held its services at Trinity Episcopal Church.

In recognition of that last service at Lancaster Street, here, also from Mildred Lentz’s files, is an undated photograph of a service in the church. Can we identify any of the people shown, or guess approximately when it was taken? 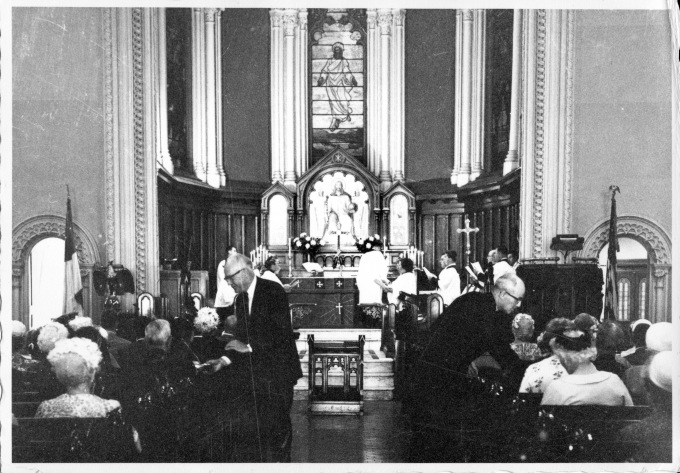 Service in the Lancaster Street church