St. Paul’s archives recently received a donation from long-time parishioner Bill White: a portrait of Bill robed as a St. Paul’s chorister about 1943. Bill vividly remembers his service in the choir of men and boys under organist and choirmaster Raymond Sherwood Halse. The fifteen boys rehearsed three times each week: twice by themselves, and once with the men of the choir.

But the choir was not only work. Bill also remembers that each Sunday Mr. Halse rated each boys’ performance. An A+ rating earned the boy a trip to Rheingold’s Pharmacy at 264 Lark (the corner of Lark and Hudson streets) for an ice cream soda. In the summer, Bill remembers that the boys had a vacation, with no rehearsals required, either at the YMCA camp on Cossayuna Lake near Salem, New York, or on Burden Lake in Rensselaer County.

These rewards were not new to the choir. The tradition of summer vacations at Lake Cossayuna went back until at least 1922, and were carried forward by Bill’s choirmaster, Raymond J. Halse, who had himself sung in St. Paul’s choir as a boy.

And a bit about Bill White’s Choirmaster…

When Raymond Halse was first listed in the choir roster in 1909, the choirmaster was Robert H. Moore, who had founded the twentieth century boy’s choir at St. Paul’s in May 1906, four months after Roelif Hasbrouck Brooks became rector.[i]

Halse initially sang for Robert H. Moore as a soprano, then as an alto beginning in 1913, the year he was alto soloist.[ii] Moore resigned in March or April 1915[iii], and later that year, T.F.H. Candlyn arrived to begin his long and successful tenure at St. Paul’s. 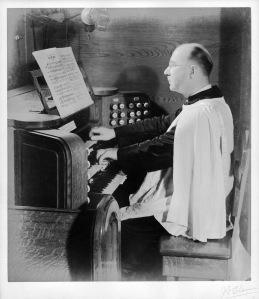 Ray Halse continued as an alto through Candlyn’s first year.[iv] But his connection with St. Paul’s and Candlyn did not end in 1916. Halse began to study organ with Candlyn[v], and also arranged service music performed by the choir.[vi] As a student at Albany High School, Halse also studied with George Edgar Oliver, St. Paul’s organist from 1887 until 1901.[vii] And Halse was also a student of Frank Sills Rodgers, organist at St. Peter’s Church, and served as Rodgers’s assistant, substituting for him during the summer.[viii]

In addition to his duties as organist and choirmaster, Halse had a day job, working as office manager at a pharmaceutical company. And he had interests in popular music as well. During the First World War, he arranged the song “We’ll Make the Germans All Sing Yankee Doodle Doo,” with lyrics by fellow Albany High graduate, David M. Kinnear. Halse was also a member of (and frequent accompanist for) the Mendelssohn Society.[x]

Candlyn left St. Paul’s in 1943 move to St. Thomas Church in Manhattan, and Halse was quickly hired to replace his mentor, beginning on October 1 of that year. So, Halse was quite new as organist and choirmaster when Bill White sang for him. During 1947, in addition to his other church duties, Halse directed “St. Paul’s School of Music,” offering lessons in piano, organ and voice at the parish hall address on Jay Street.[xi] Halse was to remain at St. Paul’s until his resignation in 1950, when he returned the Third Reformed Church.

[i] By autumn of the same year, the Albany Evening Journal reported:

The choir of men and boys and St. Paul’s church, under the direction of Robert H. Moore, is receiving many flattering comments upon the splendid work being done. The boys were organized in May, with the intention of displacing the ladies then connected with the choir, and since September have been singing all the services. There has been no change in the high class of music formerly used in St. Paul’s, the difficult anthems and morning and evening services being rendered with fine volume and tone. The choir meets for rehearsal four times each week, three being for boys only and one for men and boys combined. [“Music Notes,” Albany Evening Journal, no date available, but likely Nov 1906.]

[iii] Moore, explaining his resignation, said “that his action is entirely voluntary, and gives as his reason that the music committee wished to try a system of choir management which did not meet with his approval.” [“R.H. Moore, Organist at St. Paul’s 12 Years, Resigns,” Albany Evening Journal, no date available, but about April 1915.]

[xi] A total of seven classified advertisements in the Albany Times Union and Knickerbocker News during March and August 1947.